Akemi was born in a small town, Mito in Yamaguchi Prefecture. She embarked on her journey as a calligrapher at the age of eight, when her mother sent her to Calligraphy school to improve her writing, which had been compromised from losing sight in her left eye from cancer. Here, she was taught under Master Seizan Fujimoto, whose lineage is traced back to a well-known calligrapher of the Meiji period, Meikaku Kusakabe. At the age of 16, she started learning the style of Mr Goseki Nishiwaki through the Bunka Calligarphy association in Tokyo, over time, learning diverse styles of calligraphy used by other well-known calligraphers.

At the age of twenty-four, Akemi was qualified as a calligraphy teacher and was given the name “Koshu” by her master Seizan. The following year, after her return from the UK where she studied English, she set up her own school “Dream House” to teach Calligraphy and English. During this time, she held her first solo exhibition in Japan and continued to learn brush painting, seal making, scroll making, and gain qualifications in certificate-form writing and pen writing. With this extensive training, she developed her unique method of writing, the “Hakufu technique” (3D writing), guiding the viewer through her journey of life, each stroke with a soul of its own. She followed Seizan till his last breath, standing by his message, to never neglect the beginner’s mind.

After her husband’s death, Akemi followed his wish and moved to the UK. In 2001, she managed to re-start her calligraphy courses in the UK as “Koshu Japanese Art”. As a teacher, she has focused on bringing out the individuality of each student through their art. She is currently instructing a number of students through the grading of Bunka Calligraphy Association in Tokyo, with with 13 students qualified as Calligraphy teachers, and 4 Dan holders in both brush and pen calligraphy. Since, she has held several student exhibitions to demonstrate their work.

Koshu gained international recognition as a Japanese artist through her solo exhibition in 2013, held in London, which coincided with the publication of her art book “Love and Dream”. With this, she has been running numerous workshops in calligraphy, brush painting and seal making. In July 2014 and 2016, she was invited to exhibit her artwork and carry out demonstrations at an art event “Art in Action” in Oxford. In October 2016, she was invited to hold a solo exhibition as a part of 110 years’ anniversary event of the former British Consulate in Japan, receiving recognition as a Japanese artist in the UK. This exhibition was titled “the heart of the flower” after one of her signature artworks portraying the life of a Lotus flower. Through this exhibition, Koshu made many appearances on Japanese TV, strongly connecting her to the origin of her calligraphy. From September to December 2017, Koshu’s artwork was exhibited at “The Calligraphers in Conversation” at the San Francisco Public Library, where she also held demonstrations.

In 2017 and 2018, she was invited to demonstrate her work at the Hanami festival in Kent. In summer 2018, she was also invited to a team-building seminar for a japanese Pharmaceuticals company in Berkshire, Cowden japanese Garden in Scotland, and the Will Adams Festival in Kent, then in October at the event of “Tokugawa & Masters’ by Japanese Embassy in Georgia. She was appeared on National TVs and newspapers in Georgia, and build strong connection with people in Georgia.

As a result of the great feedback from the event in Georgia, Koshu was invited to give a Solo Exhibition at the Shignagi Museum in July 2019, which was supported by Georgian  National Museum and the Embassy of Japan in Georgia. By public demand, this exhibition was extended, then all artworks were transferred to the Georgian National Museum, where they were further exhibited for over a month.

Koshu also undertakes commissioned work. Recent highlights would be the creation of the label for the craft gin, Kokoro, which received a Gold Award in Design in 2018, and she continued her association with the brand, creating the artwork for other new Kokoro Gin products, which launched in April 2019.  Since then, she has worked with Tazaki Food Ltd, creating the artwork for the new packaging for their Japanese Food brand “Yutaka”, which was launched in winter 2019. She has also recently launched T-shirt lines, bags, tea-towels as Koshu Brand.

Koshu also worked on two major projects; the World Rugby Award, which was hosted by japan in 2019, and also the 2020 summer Olympic Games-Tokyo 2020.  These commissions are extremely prestigious and Koshu feels they are a great honour to work on. These projects are very high profile, which will bring her work and an appreciation of Japanese art, to a wider International audience.

Koshu is now working towards an exciting project involving choreography of brushwork in conjunction with Georgian State Ballet forthcoming in April 2020.

2014 July Invited to ‘Art in Action’, held at the philosophy school in Waterperry, Oxfordshire. Demonstrations throughout this four-day event.

2014 Sep​ One-day Japanese calligraphy workshop for a group of English calligraphers in Kent.

2014 Nov Workshops and demonstrations for two days at Anifest in University of Kent.

2015 Nov ​In addition to the calligraphy and seal making workshops, started sumi painting workshops a few times a month.

2016 July​ Invited to ‘Art in Action’ for the second time, held at the philosophy school in Waterperry, Oxfordshire. Four days of demonstration of sumi painting and Japanese calligraphy and exhibiting her art works.

2016 Oct-Nov Held 7 different workshops of calligraphy and sumi painting during Koshu’s exhibition at the former British consulate in Shimonoseki, Japan.

2017 July-Aug Workshops at the former British Consulate in Shimonoseki inJapan.

2017 Nov Demonstration at the Oakland Asian Cultural Centre in USA

2017 Dec  Demonstration at the Karate Champion ship in London.

2018 Apr  Demonstraions and Workshops at the Hanami Festival in Blogdale in Kent again.

2018 Jun  Workshops at the Team build seminar (for 170 people) for a big Japanese Corporation in UK.

2018 Sep   Demonstrations and Workshops at Japanese Garden Cowden in Scotland for 2 days.

2018 Sep   Demonstrations and Workshops at Will Adams Festival in Kent

2018 Oct    Demonstrations at the Georgian National Museum and other places in Georgia at the even called “Tokugawa and the masters” held by Japanese Embassy in Georgia.

2019 May  Demonstration at London SAKE Challenge

2019 Jul   Demonstration at Niko Pilosmani Museum and Rustavi Theatre,  Workshops and Lecture at the Giolab in Tbilisi in Georgia

2019 Sep  Lecture and Demonstration at Cowden Japanese Garden in Scotland

2019 Sep  Lecture and Demonstration for Bonsai association in Kent

Not only has there been an increase in the number of students coming to Koshu’s weekly classes, more and more of these students, seeking a challenge, have started taking Japanese calligraphy grading exams through the Bunka Shodo-Gakkai (based in Tokyo). Today about 34 students have joined the brush lettering calligraphy category, and 10 students have entered the pen lettering calligraphy category, working hard towards various grades. Some are already “Dan” grade holders, four of which was awarded the master’s qualification in brush lettering, and five in pen lettering calligraphy. It is challenging especially to those who are non-Japanese speakers, but Koshu has been supporting her students, challenging them and pushing their potential. 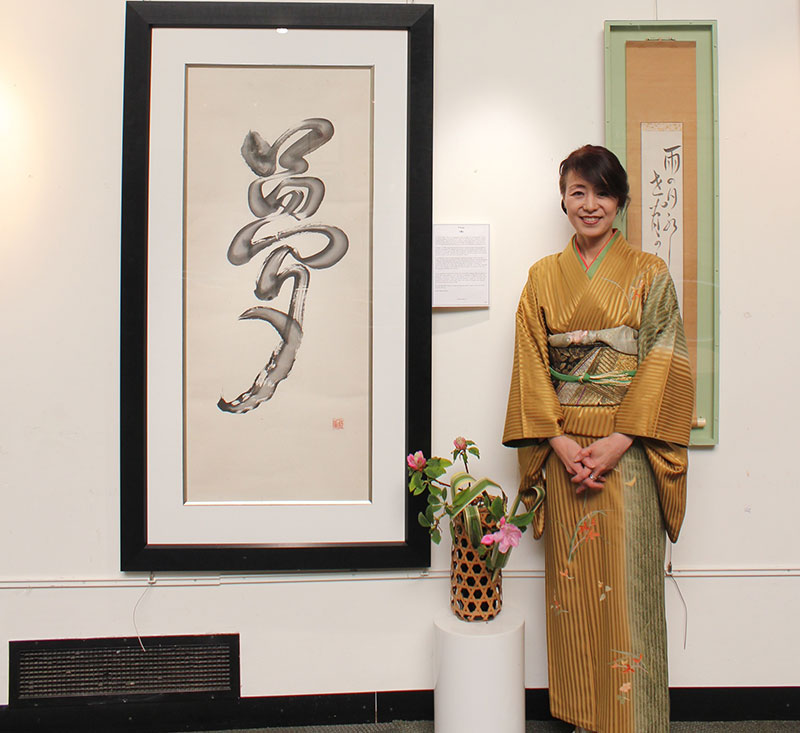 These are some of Koshu’s commisions.

2017-2018 Koshu has been asked for many different commissions, however the big ones are Musician’s Album Artworks, Film titles, and Kokoro Gin’s new projects Artworks.

In 2011, Koshu was asked to create her art work on the walls of the new Japanese restaurant “Maki” in the popular residential town of Richmond, London. On one panel, she wrote “Wa”, which means harmony. On four other panels, she wrote poems and haikus representing each season, in hopes the customers would feel at one throughout the year. On the walls of the washrooms, she painted a Japanese lady dressed in a traditional kimono with a cheery blossom in the male room and bamboo for the female room, accompanied by a Japanese poem. Maki restaurant is currently very popular from families to couples, always full with reservations.

In 2014, Koshu won a commission work for Japanese restaurant “Kobe Sushi”. Her artwork “Qi Energy” can be seen on two of the main walls, as well as on their sign and menu. After some discussion with their architect, she decided to write the letter “Qi”, hoping to give the restaurant good Qi energy. This restaurant is casual in style and very popular.

＊For some years: Commissioned to create several art works for the showroom and the office of an interior design company. Commissioned for Budo groups:  Iai-do, Aiki-do, Jujutsu and Karate groups to create logo, seal, motto of their dojo, etc.

＊For some years: Various artwork requests from a tattoo company, requested to create tattoo designs, which also can be framed for display.

＊For some years: Commissioned a dozen of art works and seals from a Reiki Dojo in Portugal. (Holding workshop in Portugal is also under discussion.)

＊For some years: Created some art works for clients in Japan

Koshu (1967-  ) : At the age of 8, she started to learn Calligraphy under Seizan Fujimoto.  Under Seizan’s guidance, she studied Goseki Nishiwaki’s style and later on studied other well-known calligraphers’s styles as well.  At the age of 24, she opened “Koshu Calligraphy school” in Japan, and since 2002 she has been teaching and introducing Japanese art internationally.  She has created her own style of art through blending the Eastern and Western cultures.

Seizan Fujimoto (1919-2004): Seizan was born in Yamatuchi and studied under Kakudo Arita.  He opened the “Honanshogei School” and became a vice-president of Japan Calligraphy Kigo Association.  Kakudo advised him to study the style of Goseki Nishiwaki, who also studied under Meikaku Kusakabe.  Seizan focused on teaching the basic skills for beautiful writing.  He used mathematical based ptoportions to schieve his beaugiful calligraphy, which he developed into a book.  He spent his life teaching and training his successors, and also used his great skill in scroll-making to contribute to the restoration of historically important works.

Kaikaku Niwa (1863-1931): Kaikaku studied under Maikaku Kusakabe.  His active period covered both the Meiji and Taisho period (late 19th century to the mid-1920s).  He created his own style, based on Zheng Daozhao style dating from sixth-century China, and the “Kaikaku style” predominated all over Japan.  He was one of the most charismatc calligraphers with Tenrai Hirai and Secchiku Kondo.  He has great influence in the world of calligraphy and focused on developing the modern calligraphy education.

Maikaku Kusakabe (1838-1922): Meikaku was a Cabinet Diplomat of the New Governmanet in the Meiji period.  After his retirement, he developed his own Meikaku style, influeneced by a Chinese Calligrapher named Yang Shoujing.  He became one of the three most influential calligraphers of the Meiji period, along with Gochiku Nakamura and Ichiroku Iwaya.  He was named as the Father of Modern Japanese Calligraphy, and kown as an artist as well as an educator.  He trained a great many apprentices, so even now a lot of calligraphers follow his style. 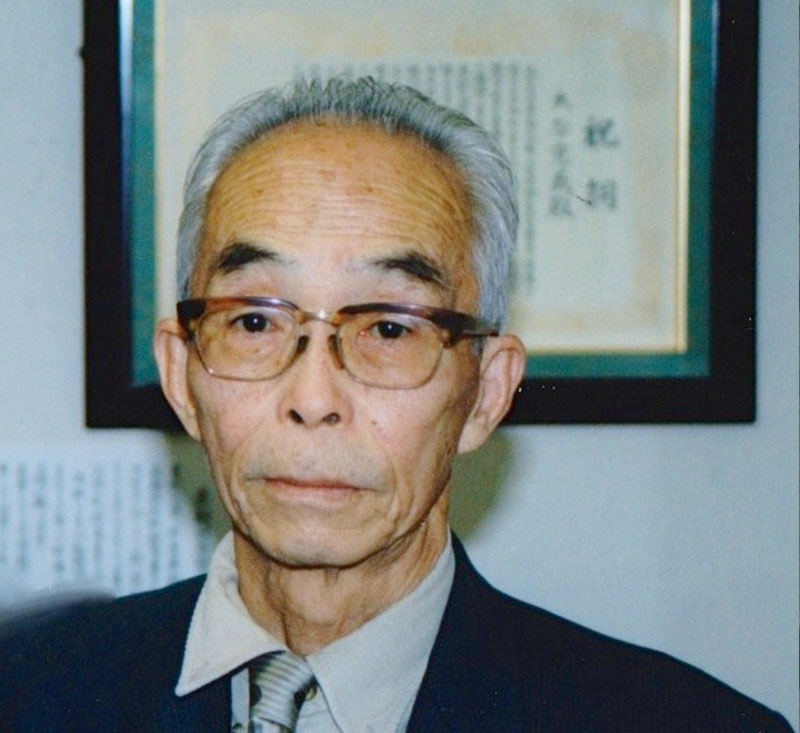